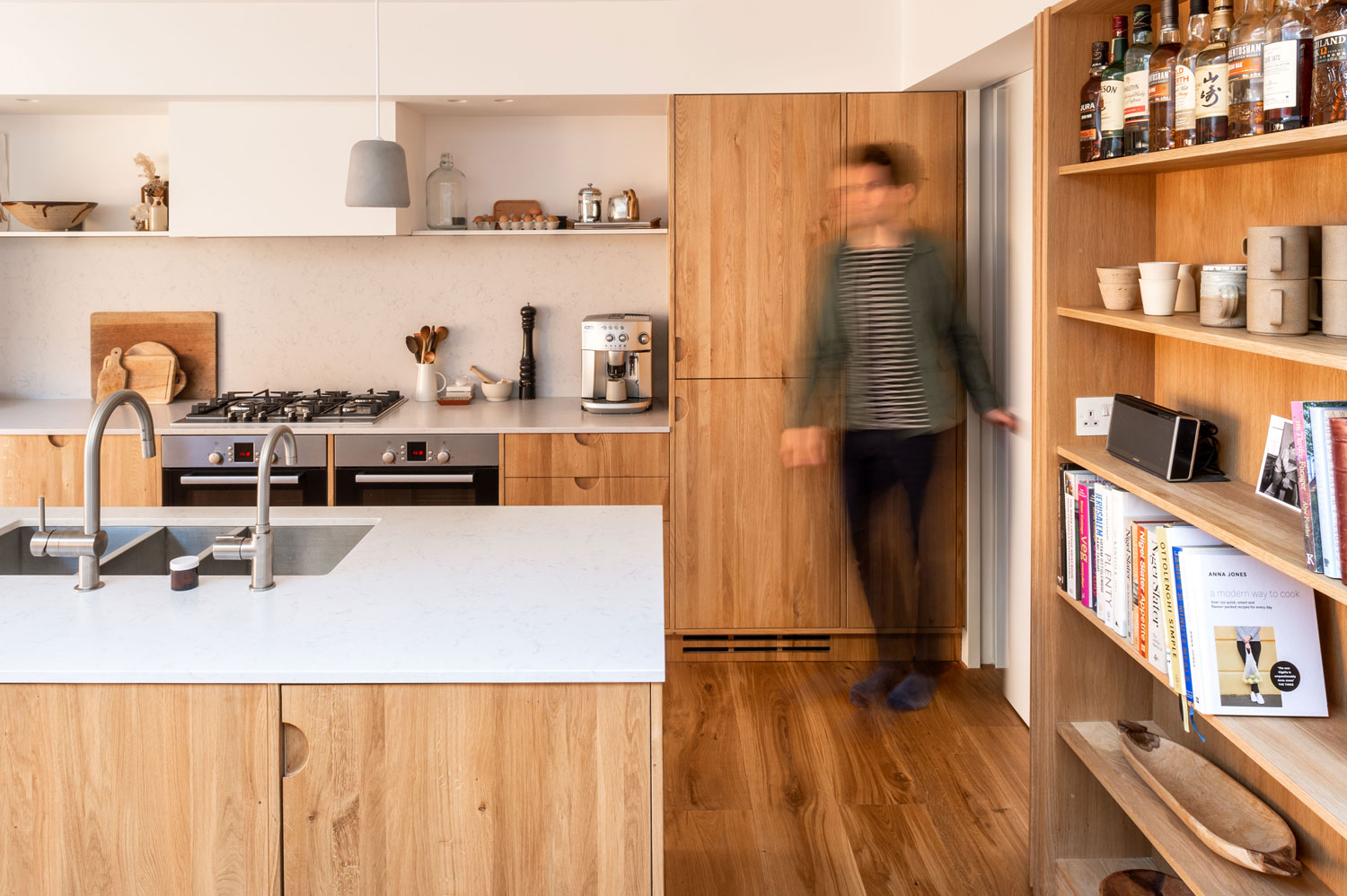 We speak to the clients at our Ogee house project to find out what it is like living in the space, and what their experience of working with us and doing the construction was like. To see more pictures of the project check out the project page here.

What was your brief?

Like most people embarking on a side return project, we wanted more space, more light and add a more open plan element to the ground floor of the property, but further to that were a number of pitfalls we wanted to avoid. Whilst we are advocates of sleek, modern design, we were cognisant of work that may not date kindly. We’d seen several other kitchens that, despite the added space, ended up cluttered, with large tables, islands with stools and sofas competed for space. We’d rented several houses via Airbnb that looked great but simply didn’t function well due to oversights in the design.

We also wanted the new kitchen to be sympathetic with the rest of the house. Given that our taste leans heavily on the mid-century aesthetic, the brief to our architects was that we wanted something elegant and timeless. We wanted to use as few materials as possible, with wood featuring significantly.

Further to that, we wanted to be involved in the design at every level. Something that is not always welcomed by architects.

The final design of the kitchen evolved over some time and was very much a team effort. BVDS welcomed our input and weren’t hierarchical in our meetings. We were able to develop an effective working relationship at a very early stage where we could bounce ideas off each other.

What are your favourite elements of the design?

The curve in the ceiling was BVDS’s idea, it’s different without being gimmicky. We were very keen on the wood and BVDS came up with the idea of the wood battens and the continuity that could be provided by running them into the lounge. We came up with the concept of the bay/box and between us we developed the idea of the garden shed running flush with the interior units, maintaining smooth elegant lines. We had several very long meetings between ourselves, BVDS and our joiner over the design of the hallway and the balance between opening the space up and maintaining functional storage space. There was a commitment on all sides to optimise the space and avoid a long dark hallway, which can be a pitfall in Victorian Houses.

We took the option not to have cabinets running along the top of the kitchen in order to keep the feel as open as possible. The downside being that we lost a certain amount of storage capacity. BDVS were great at eaking out usable space elsewhere though and ultimately this doesn’t feel like much of a compromise.

We are delighted with the results and, because of our involvement in the process, feel that this is very much our kitchen as opposed to something that was delivered to us by a third party.

Why did you choose Bradley Van Der Straeten Architects?

We appointed BVDS for several reasons. Firstly we liked their taste, and even though we had strong opinions and wanted to be involved there were definitely times when we needed to defer to their judgement, it’s not always easy to visualise how things will look so there were times when we just had to trust them. They weren’t at all precious about having their ideas knocked back and it was clear from a very early stage that they really wanted to work with us, not for us.

From the first meeting, it was apparent that they were prepared to be disciplined around the budget and give honest, sensible advice about what is and isn’t possible, rather than paying lip service to the costs and delivering something 50% over. They provisioned for worst-case outcomes which meant when they started digging the house up and we got some nasty shocks there was no extra expense. Our project came in pretty much bang on budget, which is a testament to them and our builder.

Our preliminary meetings were with George and we were a bit disappointed to learn that he wouldn’t be our main contact for the project. Our work was assigned to Jessica. We needn’t have been worried. Jessica was fantastic, extremely organised, always available, diligent, sensible, good taste and if you’re a builder, be afraid, Jessica will track you down and make you accountable…….we can’t speak highly enough of her.

Having worked so closely with them and gotten on so well, we genuinely missed them when the work was finished.

And George is a Villa fan, what more can you ask for.

How to design a home that is healthy.

10 healthy materials to use in your home.

Toxicity in the home and how to reduce it.